A worm composting system is an easy, inexpensive and compact way to turn your food scraps into rich, plant-nourishing compost and organic fertilizer! Its an excellent addition to any sustainable home, garden, or permaculture farm. Worms are an excellent choice for small scale composting, such as in your home garden or kitchen. This system of composting is also called the "vermicompost system" or the "worm bin."

Worms change food scraps into a rich usable material that helps fertilize our gardens and indoor house plants. This type of organic compost/fertilizer is superior to other forms of compost. The worms' mucous plays a special role in slowing the release of nutrients from the compost. Their mucous is deposited with their droppings (called "castings") and helps bind nutrients into the compost so that they are not easily washed away by watering or rain.

There are many possibilities in starting a worm composting system. You can purchase a pre-made kit or make your own. Worm bins use smaller varieties of worms that feed close to the surface for decomposition (instead of typical earth worms). The types of small worms used in worm composting systems include red wigglers and manure worms.

One system is in essence a single chambered bin. These can be as large as a shipping crate or as small as a shoebox. A challenge with this worm composting system is separating the worms from the finished vermicompost. Also, the single chambered bin can often become too wet, especially here in the Pacific Northwest. This is because as the worms process food scraps, excess fluid is created. This fluid, known as "worm tea" is an amazing, concentrated natural fertilizer.

Another system is a multi-tiered worm bin. The tiers often consist of several totes or trays nested on top of each other with small holes drilled into the bottoms (except for the bottom tote/tray which is used as a worm tea catch basin). We like using the multi-tiered because the worms sort themselves away from the completed vermicompost and worm tea, which makes for easy collection.

A simple and inexpensive bin system can be made using plastic totes stacked into each other. Since these are already made to fit one into another, they make it easy to make a multi-tiered worm composting system. Here is a photo of one of the worm bins we made and use at Alderleaf Farm: 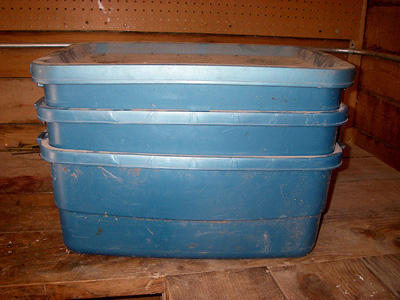 For starters, you need some kind of container. Rubbermaid totes are easy to start with and inexpensive. They leave a good amount of space for food and for worms to move around when stacked into each other. Acquire four totes, measuring 24" long by 16" wide and 9" deep. Make sure they are the same size, so they fit into each other. Leave one intact, and set it aside. Take the other three, and drill many tiny holes across the entire bottom of them with a bit size of about 3/32". These are just the right size for drainage and to allow the worms to migrate upwards through the trays.

Take one of the lids, and make tons of tiny holes (a drill bit of 5/64" is great). This is key, to allow the worms to get fresh air.

As a starting substrate you will need damp bedding, which can be peat, coconut fiber, crumpled leaf litter, or thinly shredded newspaper or brown paper bags. Place this in the first tier and add your worms. Give the worms a few days to get comfortable in their new home before you put in your food scraps or other organic wastes. Then cover the food with a damp piece of newspaper or brown paper bag as they like to eat under protective cover. As the worm composting system becomes more established, you no longer need to dampen the paper cover.

Set the totes into each other with the intact one on the bottom as the basin to capture the worm tea. 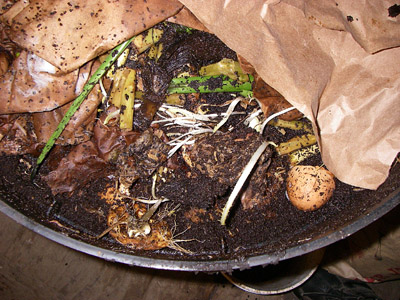 The following are two lists of things that you should practice to maximize the health and happiness of your worms. Here are some of the key things to do:

Here are some things to not do: 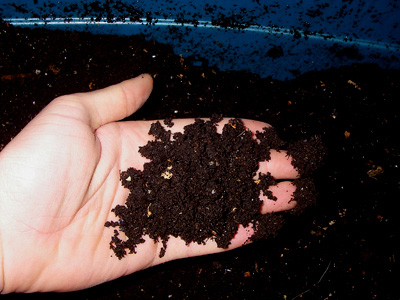 Vermicompost ready for the garden!

Using a worm compost system is fun, easy and can be educational. It will provide you with an excellent source of nutrients for your plants while turning a waste stream into a valuable resource! A worm composting system can be an excellent element to almost any permaculture design. Remember, you can always encourage your friends and neighbors to create their own worm bins, and can even offer some of your worms to get them started.

One of the best resources for creating and maintaining your worm composting system is the book "Worms Eat My Garbage" by Mary Appelhof. This book gives a detailed description on all aspects of the process.

Check out this Mother Earth News Article by Mary Appelhof, A Step by Step Guide to Vermicomposting!

Return from Worm Composting System back to Permaculture Articles