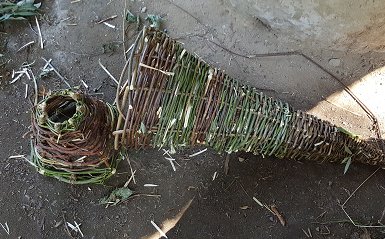 This survival fish trap is a very old method for catching fish. Primitive traps like this can work all day and night for you while you conserve energy and manage other tasks in a survival situation.

The method that I will be presenting in this article is a tried and true design. It is basically a small cone within a large cone. The practice is a simple one, and often when we keep things simple they tend to work well.

In this article we will look at the different steps to make this survival fish trap, then the how-to of actively using the trap to collect fish.

How to Build the Survival Fish Trap:

The first step is to collect the materials to make the trap. The main pieces of this survival fish trap consist of branches of two different diameters. One group is about as thick as your index finger or thumb. The other group of branches needs to be a thinner diameter, smaller than your pinky finger, and very flexible.

harvested branches for the warps and wefts 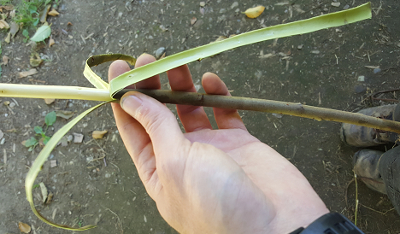 The cordage that I am using is bark from a willow. I cut a branch of willow and slowly peeled the bark off.

After all the parts are collected the first step is to bind the thin ends of the vertical pieces (aka warps) to a chunk of wood that acts like a cap. It is important to use an uneven number. Here I am using nine. An even number will result in an improper weave. 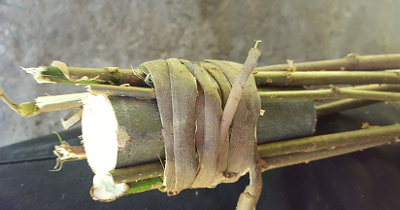 Once the verticals (warps) are bound securely to the cap then it is time to start weaving in the weavers (aka wefts). The weaving pattern is very simple: under, over, under, over, etc as you weave your way around the warps.

The ends of the weavers can just be bent and tucked into the previous weaves. When one weaver ends, just place the next weaver right where the last one ended and continue. I like to start with the skinny end of the weavers. 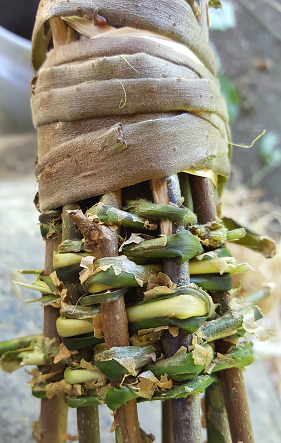 After the base of the trap has been woven a number of times, I then create a ring and secure it half way up the verticals. This is done to open the trap up a bit, and to give it the right shape. 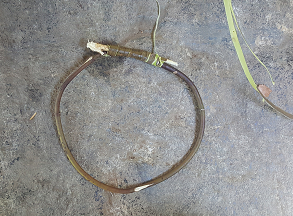 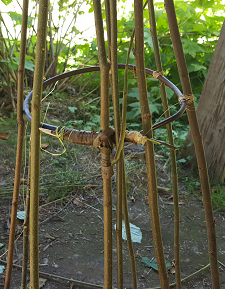 Pick a desired total length. In this case I chose about two and a half feet. 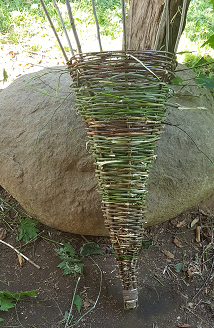 this section is about two and half feet long now

Once the total length is achieved bend the frame pieces (warps) over and jam them down into the weavers. This will add some structural stability. 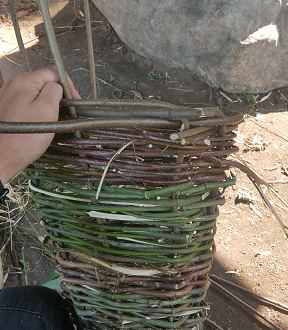 bending the warps down into the weavers

After the first cone is complete it is time to start on the smaller cone. This smaller cone sits inside the larger cone. This creates a choke point and makes it very difficult for the fish to find their way out.

diagram of the two cones

The first step to making the smaller cone is to form two circles out of flexible branches. Theses circles need to be sized correctly. The larger of the two needs to fit just inside the big cone. And the smaller circle is approximately three inches in diameter. 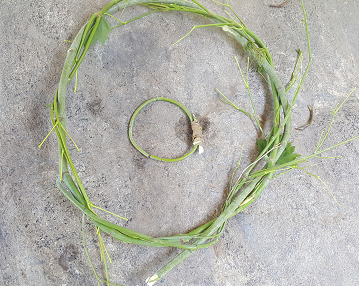 two circles for the second cone 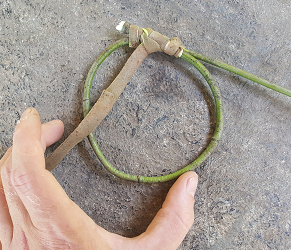 Once the circles are complete it is time to attach the verticals. I fixed them to the larger circle first with willow bark and raffia fibers. 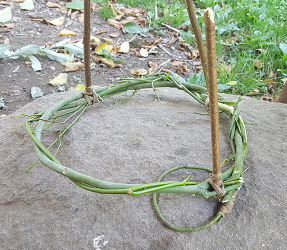 Remember to make the number of verticals an odd number (if you don’t then the weave won’t come out right). 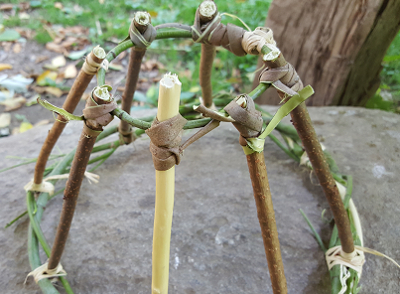 For weavers (wefts) for this smaller cone I used many of the same plant species I mentioned above. I also used roots from a red cedar tree. I walked down to a creek and found a place where the water had eroded away the bank, exposing the roots. After I harvested them I very carefully split them in half and weaved them into the cone. 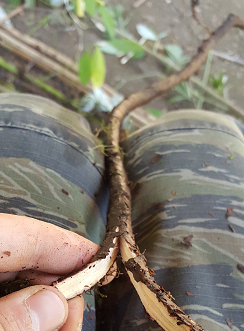 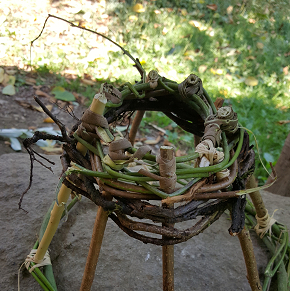 fitting the small cone into the large cone

Once the smaller cone is completed you are ready to try to catch some fish!

How to Use the Survival Fish Trap:

This trap works well as a baited trap in still waters. 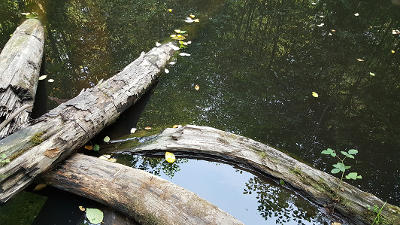 a still pond to put the baited trap into

You would want to take whatever bait you might have and place it inside the larger cone.

Some people will tie the bait inside so that it is suspended. This is done in case something is crafty enough to pull the bait out from the outside.

If you place this trap down into deep water don’t forget to tie on a piece of cordage that is long enough so you can retrieve the trap. 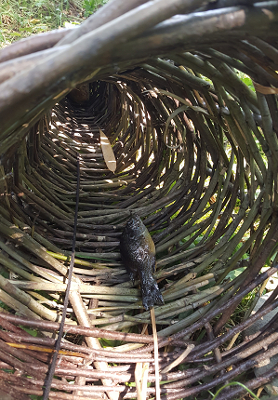 This trap can also be used un-baited. The un-baited setup is a little more time consuming but it works in creeks and rivers.

The idea is to block a section of the creek and leave a small opening where the trap is placed. The hope is that fish moving down stream will be funneled into the trap.

To improve your chances, you can go up-steam along the bank and then get into the creek and walk down the creek making a bunch of disturbance in the water as you go. Oftentimes this pushes fish into the trap. 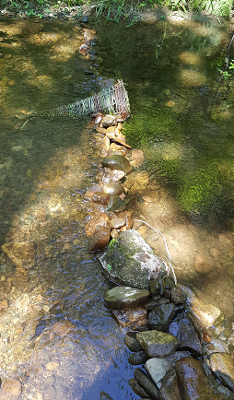 I placed this survival fish trap in a creek for a day and night, and tried to push some fish downstream. I didn’t catch any fish though I did catch a couple of crayfish! 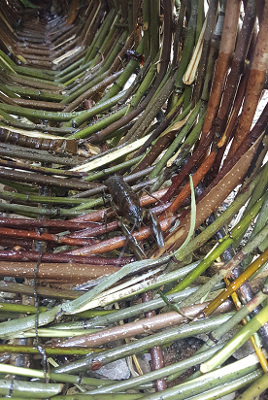 crayfish caught in the trap

Another consideration is the legal aspect of primitive traps. In many places primitive trapping is only legal in real survival situations. It’s always a good idea to check the regulations in your area. There’s often less regulation for catching invasive fish species or fish stocked into ponds on private property.

Learn about the history of survival fish traps on Wikipedia.

About the Author: Russell Field is a well-rounded naturalist with a passion for bushcraft and flintknapping. He was an instructor at Alderleaf. Learn more about Russell Field.

Return from Survival Fish Trap back to Wilderness Survival Articles