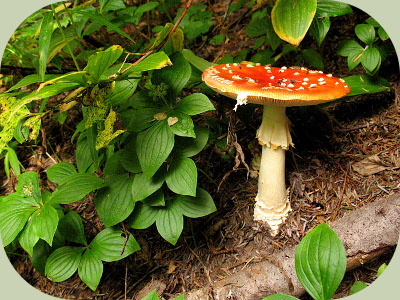 The good news is that relative to all of the mushroom species in North America, only a few of them are dangerously poisonous. This article is not meant to discourage interest in the study or collection of wild mushrooms, nor is it meant to inspire fear of mushrooms in general. Rather, we hope you leave armed with more knowledge, respect and confidence in the outdoors.

Since potentially dangerous mushrooms are found in a variety of habitats, there is no way to avoid them totally. A better approach might be to deliberately learn to identify them using reliable field guides. Once you know them, the danger they pose is minimized and the opportunity for you to appreciate them is encouraged.

How do you know if you've eaten a poisonous mushroom?

This is unfortunately not an easy question to answer. This is because there are different types of mushroom poisonings. These are often referred to by the name of the toxic compounds contained by the mushrooms.

Let us break them up into 6 categories.

These are poisonous compounds carried by the Amanita family, as well as members of the galerinas, conocybes and lepiotas. Here is a short list of some of species that contain these toxins:

Amatoxin poisoning is extremely dangerous and has a high fatality rate. The trouble with them is that they often cause liver and kidney failure. The symptoms are also often delayed and may not be visible for 6 hours or up to 24 hours after ingestion.

Symptoms include violent vomiting, bloody diarrhea, severe cramps. Often, these symptoms may subside and appear to indicate recovery. Lastly, relapse occurs and failure of kidneys and the liver leads to death.

There is no known true antidote for amatoxins. Recent hope has been shown in the use of milk thistle extract given via injection can slow or stop symptoms of amatoxins. However, limited studies have been done to show the effectiveness of this medicine and it is not yet widely used for treatment against mushroom poisonings.

Gyromitrin or (monomethyhydrazine) is a very toxic compound which is found in the false morel (Gyromitra esculenta) and hooded false morel (Gyromitra infula). The former species is responsible for a significant amount of mushroom poisonings in Europe. In the USA, however, few reports attribute poisonings to this species. There appears to be wide variations in toxicity in different geographical strains.

Other related species are:

Though some the species on this list are eaten by mushroom hunters after thorough cooking, it is not recommended.

Symptoms appear 2 hours to up to 1 day after ingestion. They may include diarrhea, vomiting, gastro-intestinal distress and headaches. In some cases, kidneys, liver and even the red blood cells are damaged which may result in death.

This is the largest group of poisonous mushrooms. Thankfully, the effects of mushrooms in this group are temporary and much milder than the first 2 groups mentioned. Here are some of the common species in this group:

The symptoms of gastrointestinal poisoning are experienced within 4 hours or as soon as 20 minutes. They include nausea, cramps, diarrhea and vomiting. Thankfully, these generally pass once the irritant is expelled from the body. Occasionally, severe cases require hospitalization. 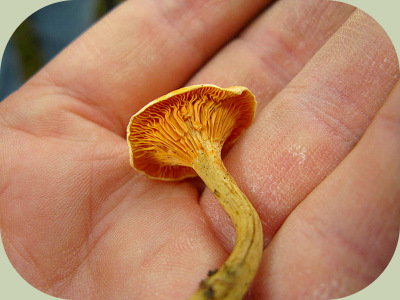 Effect of consuming poisonous mushrooms containing muscarine may include excessive salivation, perspiration, tears, severe vomiting and diarrhea. They might also include visual disturbances, difficulty breathing, a drop in blood pressure and an irregular heartbeat. Symptoms generally dissipate within 24 hours. Though rare, death may result from respiratory failure.

These are compounds contained by members of the inky cap group (Coprinaceae). Though the substance itself is not toxic, it has some disturbing symptoms when mixed with alcohol. Here are some of the members in that group reported to have caused poisoning:

The danger of coprine occurs when mushrooms that contain this compound are eaten before, during or after the consumption of alcohol. Coprine when mixed with alcohol in the human body can create symptoms such as rapid heartbeat, light headedness, a metallic taste, reddening of nose and eyes, nausea and occasional vomiting. Generally recovery is complete and within 24 hours.

This acid is converted into the compound muscimol in the body, after it is consumed. There are 3 main poisonous mushroom species that contain this toxin in our region: 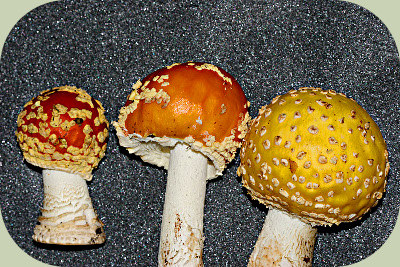 Muscimol is an intoxicating and psycho-active compound. Some of the symptoms appear about 30 minutes or up to 2 hours after consumption and may include confusion, mild euphoria, loss of muscular coordination, chills, profuse sweating, visual distortions, a feeling of increased strength, delusions, convulsions and hallucinations. Many consumers of this mushroom become drowsy and fall into a deep slumber, awakening later with no memory of their experience. The amount of ibotenic acid present in these species of mushrooms varies not just from species to species, but from individual mushroom to individual mushroom. The effects also vary greatly from person to person.

The use of Amanita muscaria by humans has been recorded for thousands of years in Eurasia, especially in the far North such as in Siberia. Shamans in some of those same areas today continue to consume this species in order to experience altered states of consciousness and use them in healing ceremonies for other members of their tribe or family.

Though some people in North America consume these 3 poisonous mushrooms for recreational purposes, this is not recommended. Often, people simply experience the uncomfortable symptoms of intoxication and choose never to try them again. Even the potential visionary experiences will hardly be worth it, and will also lack any real meaning outside of the cultural/ritual context of the shamans in Siberia.

Experimenting with this and related species is strongly discouraged. Especially since they contain other compounds in varying amounts that may cause liver damage.

Perhaps some of the most famous mushrooms are those containing the chemicals psilocybin and psilocin. This group of so called, "magic mushrooms" belong mainly to the genus psilocybe and panaeolus. Not all of them stain blue when bruised. Here are some of the most well known species:

Symptoms of ingestion are often similar to those of LSD consumption. These might include heightened color perception, visual distortions, rapidly shifting shapes and images, laughter and elation, and hallucinations or delusions. Nausea, vomiting and anxiety are not unheard of. Symptoms are generally temporary and last about several hours.

The danger in consuming these mushrooms comes often from misidentifying them and consuming a deadly species. To a novice mushroom collector, the wood-loving galerina species might be mistaken for certain psilocybes. Consuming galerina mushrooms can be deadly!

Psilocybe species were once used throughout Mexico and Central America among a variety of cultures in the context of religious and medicinal rites. They are still used by some Zapotec and Mazatec peoples for these purposes.

Psilocybin containing mushrooms are a controlled substance and possession of these species is illegal and is strongly discouraged.

Many so called "mushroom poisonings" are not what they seem. Most mushroom poisonings are allergies, overindulgence or food poisoning. Discomfort such as an upset stomach or nausea might even occur from eating certain known edible species when they are prepared improperly.

Take for instance the edible short-stemmed slippery jack (Suillus brevipes. It may cause stomach discomfort for some if the slimy skin is not removed from the cap prior to cooking. Eating wild mushrooms is fun, but needs to be approached with mindfulness and respect. Follow instructions on proper preparation carefully, and you are much more likely to have an enjoyable meal.

There are several groups of common mushrooms that have poisonous species among their ranks. The first group, the Amanitas, are some of the most deadly mushrooms of all. There are a few edible amanita species, though it is best for amateur mushroom hunters to avoid amanitas altogether. Here are some of the key features of amanitas: 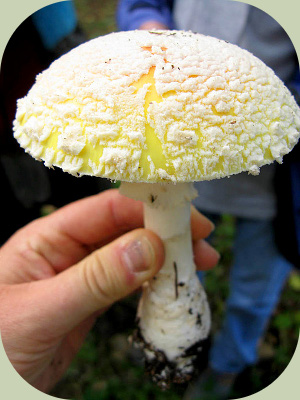 Galerinas are a group of small, brown mushrooms that are challenging to identify. The most important species to get to known is the deadly galerina (Galerina autumnalis or Galerina marginata). Though small, this species contains dangerous amatoxins, and could be deadly if consumed. To identify it, look for these features to identify these poisonous mushrooms:

The false morels and close relatives are another dangerous group, and its good to know how to identify these poisonous mushrooms. False morels (Gyromitra esculenta) have the following features:

Of the less dangerous species of poisonous mushrooms, one of the most common gastrointestinal irritants in the Pacific Northwest is the emetic russula (Russula emetica). Here are the features you need to know to identify it properly:

There are certainly some poisonous mushrooms to be found in the field that can be fatal to consume. Though, a majority of mushroom species are not dangerous. Even the poisonous species can be beautiful and interesting in their own right. Learn to identify mushrooms properly and get to know the dangerous ones well so that you will not make a mistake, especially if you enjoy collecting tasty wild edible mushrooms.

For more hands on experience with identifying wild edible and poisonous mushrooms, please join us for the Wild Mushroom Identification Class. 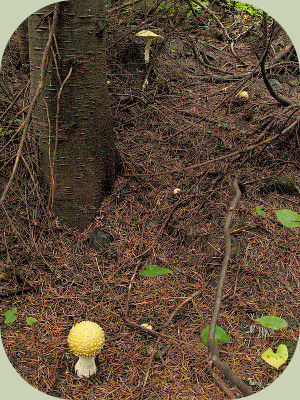 Learn about mushrooms, edible plants, and other outdoor skills at our Wilderness Courses.

Return from Poisonous Mushrooms Article back to Plants Articles Page