Mountain lion tracks can be found throughout the western United States and Canada, as well as parts of Florida. Cougars are one of the largest members of the cat family (Felidae) in North America. Though extirpated from many central and eastern states, recent studies show that they are expanding eastward into their former range. 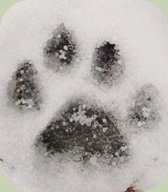 Tracks: Mountain lion footprints are generally round with a diameter from 2.75 to 3.75 inches. They show four toes, normally without claws. Their tracks are asymmetrical with a leading toe, which allows left and right tracks to be differentiated (in the photo to the right, the lead toe indicates a right footprint). Mountain lion tracks have a large, m-shaped (or trapezoid-shaped) palm pad, which has two lobes towards the front of the pad and three lobes towards the back of the pad. Front tracks are generally larger, wider, and more asymmetrical than hind tracks.

Gaits: Mountain lions frequently use an overstep walk as their primary gait. The photo below shows this gait, where the hind foot lands ahead of where the front foot had landed. Step lengths in this gait vary from 15 to 30 inches. Cougars may also direct register (where hind feet step inside of where the front feet had landed), when moving through deeper snow. A variety of faster gaits are used when chasing prey or escaping danger. 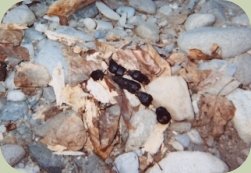 Scat: Mountain lion scat is generally 1 to 1.5 inches in diameter, and is formed into dense, blunted segments. The surface is generally smooth and the scat has a strong odor. Contents include meat remains and will not contain fruits, seeds, or nuts. Cougars will often scrape the ground and then scat on top of the debris or cover their scat with debris.

Marking Sign: Mountain lions also create marking sign to communicate with other individuals. The most common type of marking by cougars is done by scraping the ground with their hind feet and then urinating on top. These scrapes can be found near kill sites and along their travel routes where there is substrate that holds scent (such as pine needles) that is somewhat protected from the elements (such as under a large tree). A less common marking sign for cougars is tree scratching. The photo below shows where a cougar was scratching on a punky horizontal log. 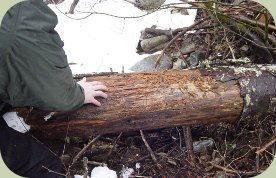 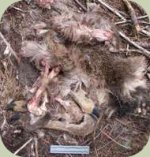 Feeding Sign: Deer are a primary prey item for cougars in North America. Cougars generally feed on nutritious organs and meat, leaving behind the stomach contents, hide, and hooves. Remains are often in a pile (rather than spread out) and are often covered with debris. The photo to the left shows the remains of a deer that was preyed upon by a cougar, left in a neat pile, but not covered. 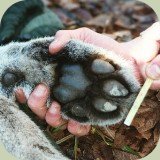 Similar Tracks: Large domestic dog tracks are frequently mistaken for mountain lion footprints. Dog tracks show claws, are generally symmetrical, and do not have a prominent lead toe. Dogs also have a triangular-shaped palm pad which is much smaller in relationship to the toes (as compared to a cougar palm pad which is very large in comparison to the toes). Lynx tracks can also be mistaken as cougar tracks. Though the overall size of the foot is similar, lynx have a very hairy foot with an extremely small palm pad and small toe pads. Lynx also have a shorter step length (distance between tracks). The photo to the right shows a cougar's left front foot.

Cougar in a western Washington rainforest.

About the Author: Jason Knight is a cofounder of Alderleaf Wilderness College and the author of The Essential Skills of Wilderness Survival. He has been teaching wilderness skills for over twenty years. Learn more about Jason Knight.

Return from Mountain Lion Tracks back to Wildlife Tracking Articles