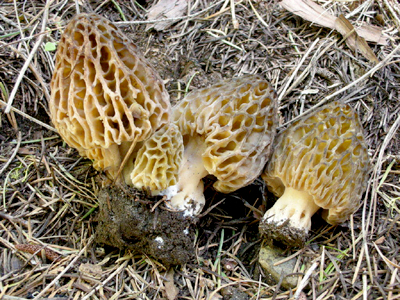 Morel mushrooms are an elusive, exciting and distinctly delicious group of edible wild mushrooms. The word "morel" is loosely used to describe a variety of mushrooms of somewhat similar appearance belonging to several different groups, including Morchella, Verpa, Helvella and Gyromitra.  Morels are generally those mushrooms with a hollow stalk, and a wrinkly, brain-like or honey-combed cap.

The mushrooms mentioned under the label "morel" include both choice edibles and some potentially fatally toxic species.  Proper identification is key, as with any wild edible you choose to consume. Even the choice edible species, the Morchellas (true morels) need to be cooked as raw they are responsible for causing upset stomach in many people. 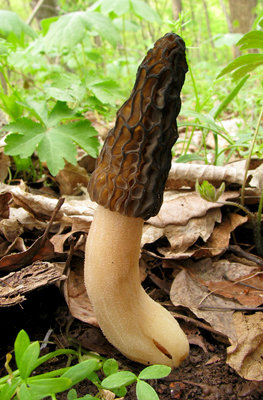 This group of morel mushrooms, also known "true morels," and these are the best to seek out as far as edible morels go. These morels have short, thick, hollow stalks and a rather conical cap that is attached the full length of the stalk. Their caps are pitted, almost like a honey-comb. The three most common species are the black morel, white morel and yellow morel.

The black morel (Morchella elata) has a white to tan stalk with a darker cap. The cap starts out gray-tan and ages to dark brown or black with maturity. They are often found in old forest fire sites, and can grow to be some of the largest morels.

The white morel (Morchella deliciosa) has a tan stalk and a stalk, often more elongated cap.  Generally this species is a pale, off-white color in appearance.  It is often found in urban, and suburban gardens, as well as orchards and small woods.

The yellow morel (Morchella esculenta) is overall yellowish-tan in appearance, with the stalk being sometimes slightly paler. This species is more like to be found in with conifer or hardwood trees, but also sometimes in orchards.

All three species are edible and highly sought after mushrooms.  They store well when dehydrated and have a strong, rich, earthy flavor and aroma. These morels generally fruit in the spring or into the summer, if favorable conditions persist. 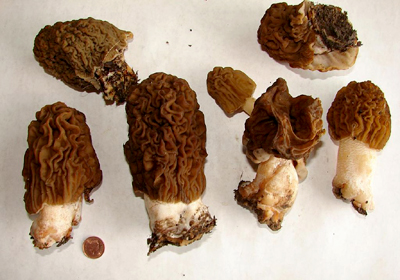 This group of morels is often confused with true morels, as they share some features in common.  The most often encountered species in this group is the early morel (Verpa bohemica). This morel mushroom has an short to elongated stalk, which starts out completely hollow but is filled with a pithy fibers at maturity. The cap is conical, wrinkle, brownish and attached only near the top.  This means that when touched, the cap can be moved around mostly apart from the stalk, not unlike a hanging skirt. This species is eaten by some, but should be approach with caution as it does cause stomach upset and loss of muscular control in some people even after being cooked. It often preceeds the fruiting of true morels by a few weeks in the springtime. 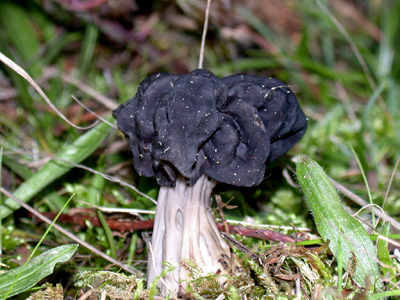 This group of mushrooms, also often called "elfin saddles" are wonderfully strange looking group of mushrooms. One of the most common is the fluted black elfin saddle (Helvella lacunosa). This particular species is black to grayish overall, with deeply fluted stalk, and strangely contorted cap. The fluted stalk can have an appearance not unlike the strikes of wax that form on the sides of a melting candle. It is found in woods and under trees, especially pines, oaks and Douglas firs.  Considered edible, caps are sautéed but stalks are usually discarded. 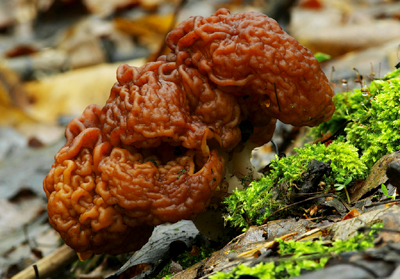 This group is known as the "false morels" and some of them are potential dangerous to consume. Gyromitras are unlikely to be mistaken for true morels (Morchellas) because they have caps that are not conical or pitted, but they are potentially confused with elfin saddles (Helvellas). This group of mushrooms contain monomethylhydrazine, a chemical that can be fatal to humans, even in small amounts. It is usually removed by cooking or drying, but it takes only a very small amount to be harmful to humans, and so this group is really best avoided altogether.

Most gyromitras have a short, wrinkled stalk and an irregular, wrinkled cap that can look somewhat walnut like in some species. One of the most commonly encountered is the brain mushroom or false morel (Gyromitra esculenta). This species has a brownish cap that starts out somewhat cup shaped, but becomes lobed or saddle-shaped as it matures, with a complex, wrinkled surface similar to a brain.  The stalk is usually smooth or grooved, thicker on one of the ends and hollow or with pithy core.

Return from Morel Mushrooms back to Wild Edibles Articles