Coyote tracks and sign can be found throughout North America in nearly all habitat types. They are highly adaptable, living in wilderness, rural, suburban, and even urban areas. They eat a wide range of foods from small rodents, to birds, fruits, berries, and grains.

Gaits: Coyotes utilize a variety of gaits, including walking, trotting, loping, and galloping gaits. One of their favored gaits is an overstep trot, where front and hind feet on the same side of the body land close together, with the hind landing slightly ahead of the front. These trotting gaits leave a line of tracks that is very straight and narrow. When utilizing a trot, step lengths between groups of tracks often measure from 15 to 22 inches. The picture below shows a slow trot, where each hind track has landed slightly behind the front track. 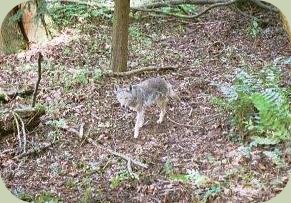 Coyote captured with a motion-sensing camera

About the Author: Jason Knight is the Director at Alderleaf Wilderness College. He has been teaching wilderness skills for over twenty years. Learn more about Jason Knight.

Return from Coyote Footprints back to Wildlife Tracking Articles