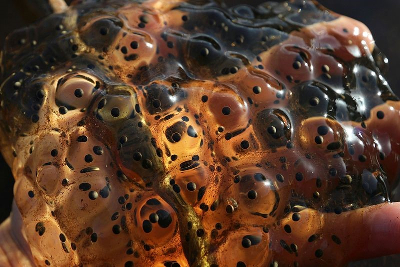 Identifying Amphibian Eggs in the Lowlands of Western Washington

Finding amphibian eggs in your neighborhood ponds and wetlands is an exciting discovery that captures the imagination of kids and adults alike! Learning to identify what species made those egg masses is a fun challenge and the information can be helpful towards local conservation efforts.

Though Chris shares key tips for identifying the egg masses of some common amphibians here in the Pacific Northwest, the information can help you begin to learn what to look for no matter where you live!

The breeding season for amphibians in the lowlands here in Western Washington begins in mid-winter and extends into the spring depending on the temperature and moisture needs of breeding adults.

Adult amphibians breed in areas of still water that contain water long enough for full development of the larval into the adult form.

Many amphibians show site fidelity by moving to traditional breeding sites where the individual was born and breeding has been successful in the past. Some individuals will wander and colonize new sites. 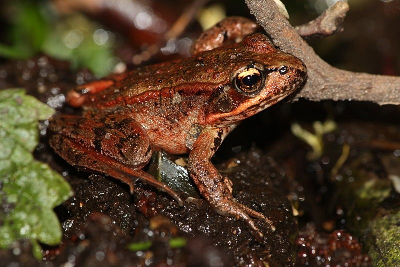 Northern red-legged frogs breed primarily in February and March in the Puget Trough. The breeding behavior of northern red-legged frogs is typical of the genus with males establishing territories in breeding ponds via vocalizations and aggression. Females that enter the pond are grasped in amplexus (see image below) by the male. Fertilization is external as the male emits sperm onto the eggs of the female outside of the female’s body. 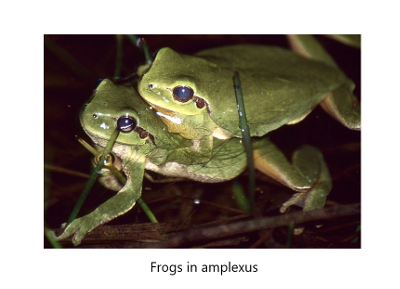 Unlike other Ranid frogs, female red-legged frogs lay their egg masses separate from those of the other females.

Egg masses of red-legged frogs can be identified by the following characteristics:

1) The mass is about the size of a cantaloupe.

2) The mass is soft slipping through the fingers if attempts are made to lift it from the pond.

3) Individual eggs have a wide jelly coat giving the mass the appearance of having fewer eggs for its volume than other species.

4) The mass is usually attached to submerged woody debris or aquatic vegetation.

5) The mass floats to the surface and spreads out near hatching time. 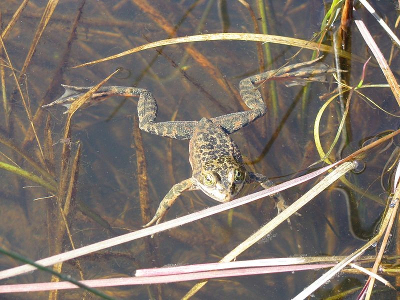 Oregon spotted frogs breed in February and March in the Puget Sound lowlands. These are highly aquatic frogs. The breeding cycle of spotted frogs follows the pattern of other true frogs.

Egg masses of Oregon spotted frogs can be identified by the following characteristics:

1) The egg masses are similar in size to red-legged frog masses.

2) Eggs are laid in communal masses.

3) Egg masses often with tops above the water-line.

4) There's a thin layer of jelly on individual eggs. 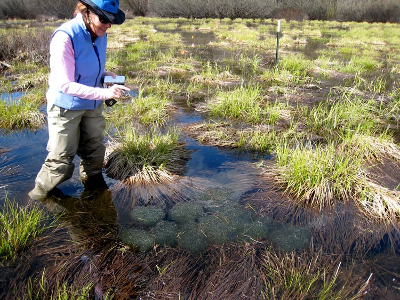 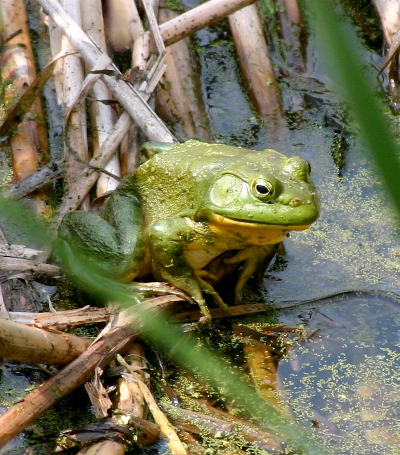 American bullfrogs breed later in the spring as water temperatures increase. Male bullfrogs advertise with a distinct deep “jug-o-rum” call. The rest of the breeding cycle is similar to other frog species in North America.

Egg masses of bullfrogs can be identified by the following characteristics:

1) A sheet of eggs laid on the surface of the water.

3) The eggs are very small. 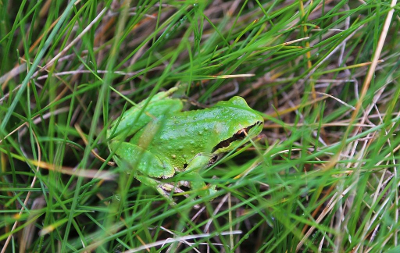 The diphasic “krek-ek” advertising call of male pacific chorus frogs is one of the seminal sounds of the coming spring. Males hold aquatic territories that they defend with physical aggression and vocalizations from other males of the same species.

Females lay their egg masses on aquatic vegetation in shallow still waters. Pacific chorus frogs have fast larval development allowing them to use aquatic habitats that hold water only seasonally.

Egg masses of Pacific chorus frogs can be identified by the following characteristics:

1) Egg masses are oblong in shape.

3) There are more eggs per unit area than species with similar egg masses.

4) The mass is soft and amorphous when removed from the water.

5) The mass is attached to aquatic vegetation in shallow water. 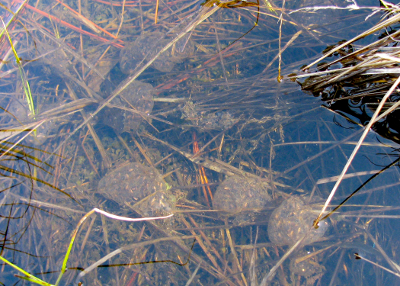 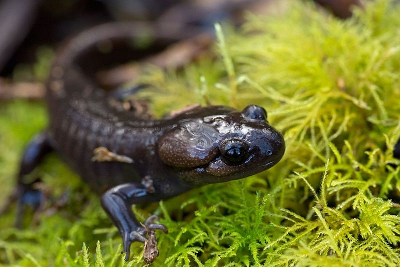 In the lowlands of Western Washington many northwestern salamanders breed in their larval form. 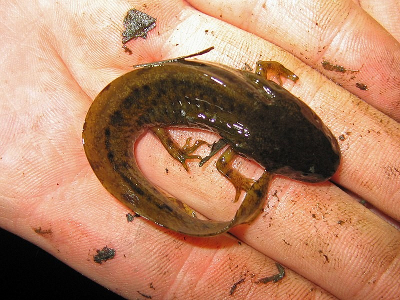 Egg masses of northwestern salamanders can be identified by the following characteristics:

Note: Breeding neotenic salamanders (larval) lay eggs that are softer and laid on the bottom of ponds instead of on submerged debris. 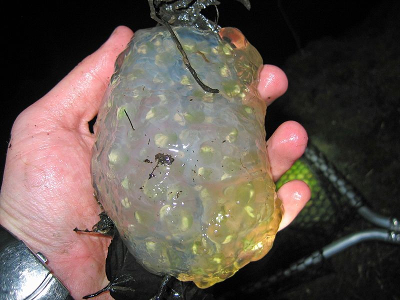 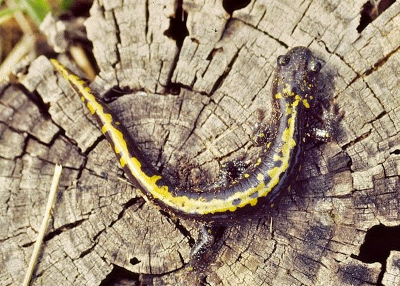 The breeding cycle of the long-toed salamander is similar to that of other  salamanders in the Ambystomidae family, such as the northwestern salamander.

Egg masses of long-toed salamanders can be identified by the following characteristics:

1) Eggs are laid in small masses or singly.

3) There is a thick layer of jelly on individual eggs.

4) Eggs look widely spaced within the mass due to the size of each egg. 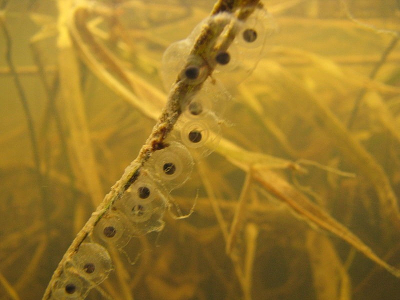 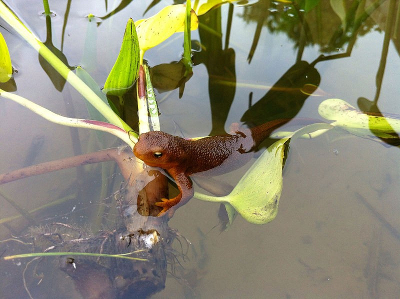 Egg masses of rough-skinned newts can be identified by the following characteristics: 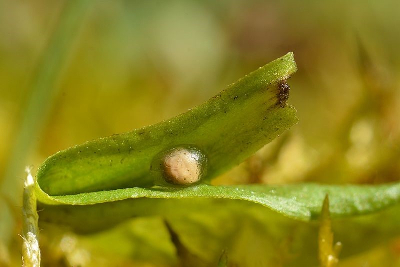 Identifying amphibian eggs can be a valuable addition to many wildlife conservation projects. It can also be a fun springtime activity for the whole family. I hope this article enhances your outdoor adventures!

Return back from Amphibian Eggs back to Wilderness Skills Articles