The act of tracking animals connects us to our distant ancestors and may have helped us become who we are as modern humans. It is in the words of Ernest Thompson Seton “…the oldest writing known on the earth.” Tracking is a practice that includes looking at many different elements in the landscape, including footprints, trails, beds, feeding sign, scat, scrapes, fur, bone, chews, feathers and kill sites. All of these tell us something about the animals around us, and help us to become more aware and to better understand our wild neighbors.

When tracking animals, we must first come to an understanding of what is meant by what we call “tracks and sign.” Essentially, tracks and sign include any kind of mark or disturbance left by the passing and activity of an animal on a landscape. In Africa, this general category is known as “spoor.” It might help us to better understand the different kinds of tracks and sign, but looking at them separately. 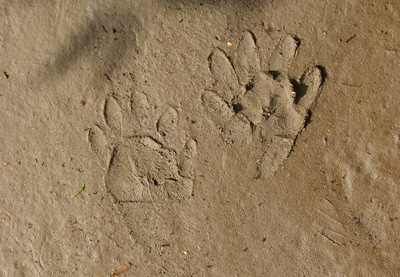 The most well-recognized type of sign left by the passing of animals are footprints, which are generally referred to as “tracks.” Tracks are generally made by the feet, but may also include marks left by the tail. In clear tracks, species can be distinguish by a combination of size, shape and distinct features of the feet. Depending on substrate, tracks may be clear and recognizable down to specific species or groups, or may be just compressions in coarse debris. In the latter case, the track patterns can help you figure out what likely species left these marks. Some of the common substrates that can leave clear tracks are snow, silty mud and sand. 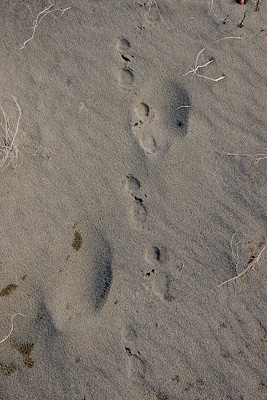 As you practice tracking animals, you may start to notice larger patterns left by the passing of animals. In ideal substrates, these might be sets of clear tracks in particular arrangements that demonstrate the speed and style of movement of the animal. These patterns of tracks come together to form a line of tracks known as a "trail." In areas were clear tracks are hard to see, it might just be an area of cleared or broken vegetation or packed down soil where the animal has passed repeatedly. This is also considered to be a kind of "trail." 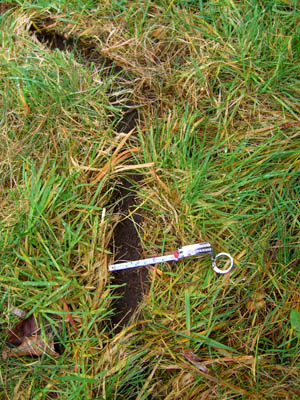 Subsurface trails are known as tunnels, whether they are made under leaf litter, soil or snow. The diameter of the entrance to such a tunnel can help determine the species that created and/or uses said tunnel. Molehills are indicators of underground tunnels, and they are the piles of soil removed under the surface to create the tunnels.The tunnels made through this grassy pasture were created by voles.

Some animals, such as beavers, also dig open-topped tunnels in wetland areas that act as channels for water. This creates deeper areas that hold water even in drier times of the year, but also allow beavers to move through the area mostly submerged, and therefore, largely unseen by potential predators.

Tracking animals often leads to find a variety of different kinds of burrows. Burrows are tunnels that provide shelter to animal, and often lead to a den of some kind. Just like subsurface trails (tunnels), burrow entrance holes can be measured to gauge the size of what animal might have created it and/or currently uses it. 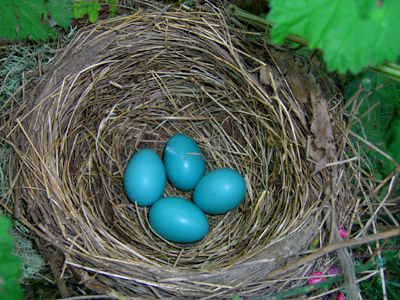 Nests are the sheltered sleeping quarters of certain animals, and for many are also the space in which they rear their young. These are shelters made of natural materials put together using mud, by weaving or piling materials. Nests are utilized by a variety of wildlife including: birds, squirrels, rats, mice, voles, and other small mammals. Bird nests are a relatively common sign you can spot while tracking animals. The robin's nest in the photo above is a familiar sight in many landscapes, especially in springtime.

Many nests made by mammals are found within a burrow, and general are out of sight. The largest nests are the lodges made by beavers, which can be truly impressive at up to 6 feet tall and several meters wide! 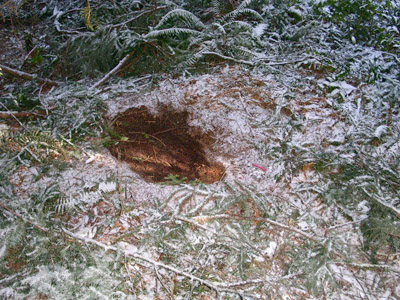 Some larger mammals create temporary resting or sleeping areas in hidden spots under trees, on hillsides, in shallow caves or other sheltered spots. These temporary impressions left by the bodies of these animals are known as lays. If the spot is used repeatedly and for longer periods of time, it is known as a bed. The shape of a bed can be a useful clue to figuring out the identity of the animal which made them. The bed pictured above is from a black-tailed deer (Odocoileus hemionus columbianus) that had bedded down in a sheltered spot on the forest floor during a winter snow storm. 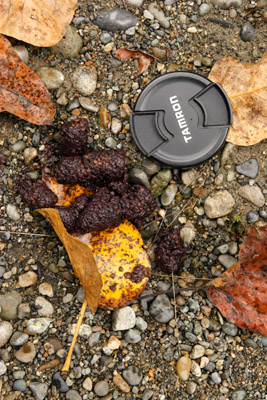 Scat is animal feces, and it can tell you a lot about the animal that left it. Many mammals, especially carnivores, use scat to leave scent marks that communicate specific information to their neighbors. This might include information about the age, sex, health and disposition of the animal. When fresh, the scat of many animals can help you determine the species that left it. When tracking animals, the details to look at are: size, shape, location, and content. All of these tell you something about the animal in question. The scat in the photo above is a raccoon scat (Procyon lotor) and is composed of blackberries.

Urine is generally much harder to see, unless it is left on snow or other easily visible substrate. Like scat, urine plays a key role in communication for many mammals. It is sometimes – but not always – deposited with scat. When it comes to identifying urine, your sense of smell is your greatest ally. The challenge with using urine in tracking animals is that it is very difficult to describe, and they best way to learn about it is to go out there and smell it for yourself! 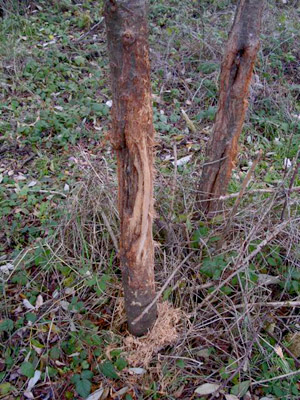 While tracking animals, sometimes the sign we find is not on the ground but on or in the surface of a plant. This includes bite or scratch marks in bark, cambium, on leaves or twigs. The size of a bite taken out of a leaf or twig can help you guess the identity of an animal. Also, the quality of the edge of the bite mark can tell you for instance if it’s a rodent/rabbit, deer, or carnivore.

Some animals such as kangaroo rats, pika and aplodontia will create “haystacks” or piles of vegetation that are left out to dry and cure for future use.

The removal of bark is another common sign in the landscape, and can be created by a variety of feeding animals including beavers, hares, voles and even bears.

Some mammals, such as members of the deer family will also create rubs using their antlers, and in some species, with their teeth. These marks are left by bucks for the purpose of scent marking. The animal will rub a small sized tree down to the cambium layer and then rub the scent glands on their face or neck onto these marks. Rubs may be reused many times in some locations. These sites leave scent messages for all other deer which pass by. The rub in the photo above was made by a black-tailed deer (Odocoileus hemionus columbianus). 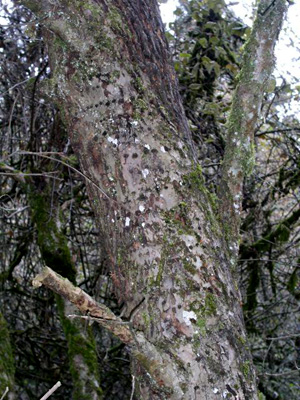 Woodpeckers leave several different kinds of sign on trees living and dead. Tracking animals need not be limited to areas close to or on the ground, and most of the sign created by woodpeckers if well off the ground. The machine-like holes in the photo above were left in a bark of a living tree are made by sapsuckers. The marks in the photo above were made by the red-breasted sapsucker (Sphyrapicus ruber). The more dispersed holes left in snags are made by a variety of other woodpeckers, with the size of the holes relating roughly to the size of the species that made them. 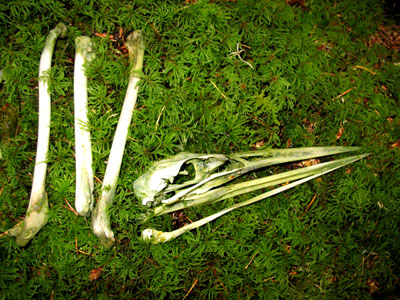 Another exciting type of sign to find while tracking animals is bones. The most useful bones to find are skulls, which often can be used to identify an animal down to species. Skulls can tell you a great deal about an animal, including what are its dominant senses, what kind of stuff it eats, how it finds food, its rough age, and much more. In the photo above, these bones were found underneath the active nest of a bald eagle, and belong to a great blue heron (Ardea herodias) . 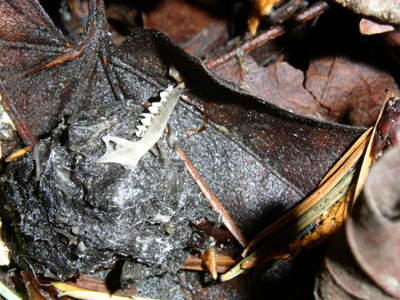 Cough pellets are the regurgitated remains of meals coughed up by a variety of birds. These often include fur, feathers, scales, insect carapaces and bone fragments. One of the most exciting kinds of pellets to find while you are tracking are those of owls, since they have relatively weak digestive juices and often many bones and even intact skulls can be found in their pellets! The lower mandible sticking out of the pellet in the photo above is from a American shrew mole (Neurotrichus gibbsii). 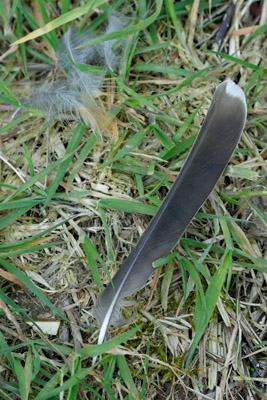 Feathers are a common animal sign, found in all kinds of different wildlife habitats, including urban areas. When relatively intact, many feathers can be identified down to a specific group of birds or even down to the species level. Feathers can also reveal what parts of the bird they came from, how they are used on the body, and what kinds of flight are possible using that particular shape and size of feather. The feathers in the photo above are from an American robin (Turdus migratorius). 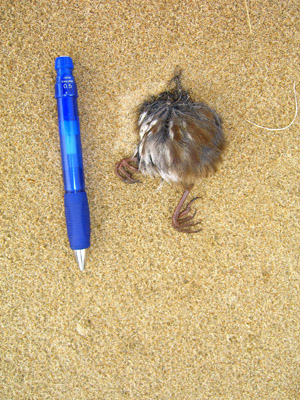 These are the feeding remains of carnivorous animals such as: birds of prey, weasels, wild cats, wild dogs, bears and other predators. Though they might seem a bit gruesome at first, kill sites can teach you a great deal about tracking animals, including the lives of both the predator and its prey.The body in the photo above is from a song sparrow (Melospiza melodia).

The manner in which an animal is consumed, the type of animal being consumed, the location of the kill site and any other associated sign such as tracks, scat, and so on can reveal the likely predator involved. On larger kill sites, the body of the animal may be visited by many different animals that did not kill that animal. A kill site is a food bonanza that is not easily passed up and even small birds such as chickadees may feed briefly on the remains of a dead deer. Nothing is wasted in the natural world. 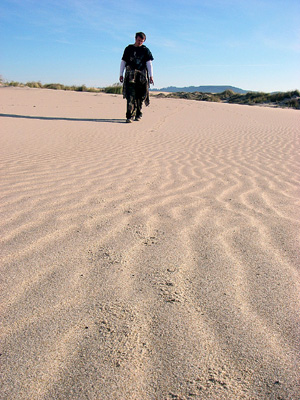 Bring it all together: Trailing

When you have practiced looking at different kinds of tracks and sign, you might wish to take your skills of tracking animals to another level and begin practicing the art of trailing. Trailing is following an animal across the landscape, reading its stories and attempting to locate the animal itself. It is in some respects like putting the pieces together into more cohesive stories. If tracks and sign are the letters and words, trailing is like reading sentences or paragraphs. It is best to practice trailing at first in locations with good substrate and plentiful wildlife.

Wildlife of the Pacific Northwest by David Moskowitz

Return from Tracking Animals back to Wildlife Tracking Articles

Knowledge is Power - Grow Your Wilderness Skills! Get monthly updates on new wilderness skills articles, upcoming courses, and special opportunities. Join the free Alderleaf eNewsletter and as a bonus you'll get our mini survival guide: