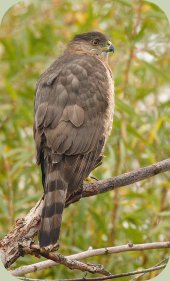 The sharp-shinned hawk and Coopers hawk are a common and exciting part of the ecology of many suburban parks, woodlands, and neighborhoods. These two members of the family known as Accipitridae, are built for speed and maneuverability. Like all members of their family, they are characterized by their short wings and long tail. Both hawks live mainly on a diet of birds. Though the two types of hawks are often confused, there are some definite differences.

These two hawks can be confusingly similar in physical appearance, so here are some ways to tell them apart: 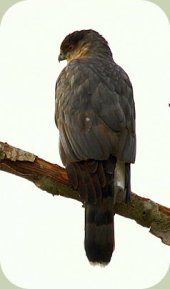 As you may have noticed from the measurements above: the female of both types of hawks are larger than the males. This is true for most birds of prey throughout the world. Some ornithologists believe that this size difference is an adaptation which minimizes competition between the sexes, allowing the female birds to hunt prey that is too large to tackle for the male hawks.

Both hawks are very fast in level flight, and often catch birds in mid-flight with a swift grab from their sharp talons. Incredibly, these hawks can fly at nearly full speed through dense woodlands and squeeze through gaps not much larger than their body width without even breaking stride!

Both of these species help keep birds populations healthy by taking out those who are unhealthy or unwary. Although some bird watchers express great frustration at observing these birds of prey hunting the songbirds that visit their feeders, it is important to remember that they help keep the feeder a healthier place for the birds to eat. Over-crowding at bird feeders and feeding stations can cause a variety of problems, including helping spread disease between and among species of songbirds.

If you are lucky enough to witness these hawks flying around in your area, enjoy watching some of the best aerial hunters in the world! 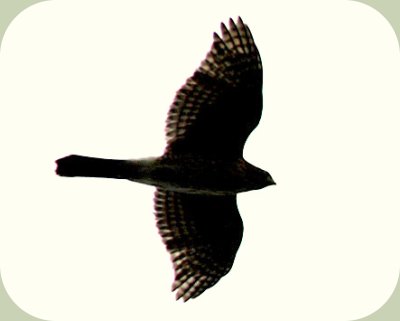 Check out this helpful guide from FeederWatch.org

Return from Sharp-shinned Hawk & Coopers Hawk back to Bird Articles