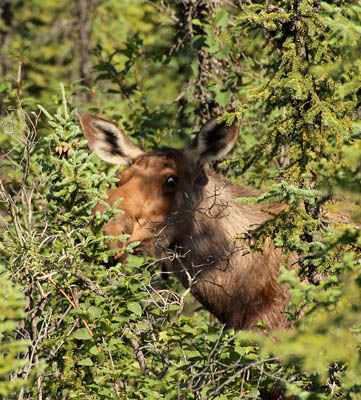 After months of preparation we are on our way to Alaska to look at tracks. Moose habitat and behavior were high on our list of species we hoped to encounter. We just spent 39 hours straight driving through Canada and are close to the Alaskan border.  The last three hours were filled with a dirt road containing potholes the size of minivans and a late night broadcasting of the World Invitational Moose Calling Championship. We finally stop to rest, only to be woken three hours later by a passing motorist. I crawl out of the tent completely exhausted and when I could finally focus I was greeted with a bull moose in the middle of the lake beside the road. He was magnificent, and he was eating something under the water… 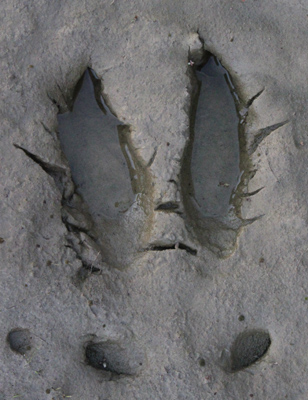 Their great size, long legs, short neck and palmate antlers distinguish moose from other cervids. Long legs allow adult moose to handle snow depths of 36 inches. Muscular shoulders make the moose appear humped and they have a characteristic "bell" of skin known as the dewlap which hands from their neck. Moose are sexually dimorphic, bulls weigh between 850-1200 pounds and the smaller female (cow) weighs around 600-800 lbs. Moose have a total height of 8-10 feet. 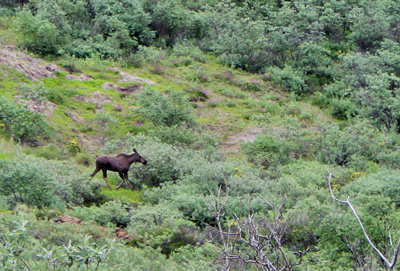 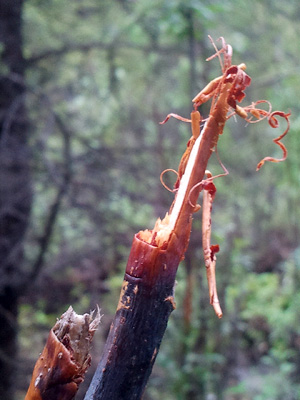 The word 'moose' comes from an Algonquin Indian language and means 'twig-eater'. Moose are browsers rather than grazers. Because they lack upper incisors the browse is raggedly torn. Moose feed on leaves, twigs, buds, and bark of willow, balsam, aspen, dogwood, birch, cherry, maple and viburnum and aquatic plants such as lilies, rushes, arrowheads, and aquatic sedges. They will wade, swim and even dive to depths of up to 15’ to reach these aquatic plants.

Tracks: My first trailing experience in moose habitat happened this spring in North Central Washington. We were traversing old logging roads looking for fresh bear sign when we came across a female moose in the road. She took off down an embankment into the forest and we spent the next 8 hours trying to catch up to her… 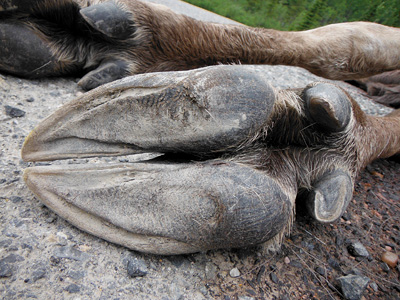 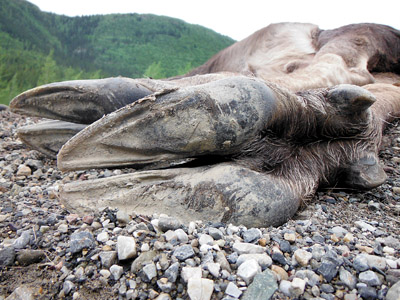 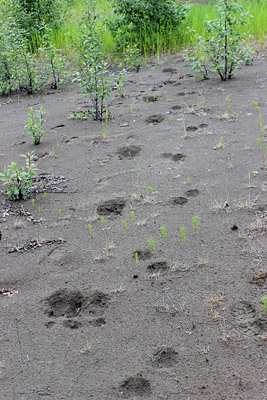 The trailing was going slowly. I have to climb up and over downed logs and branches and she just walks right over them like they are twigs on the forest floor. Will I ever catch up to her? 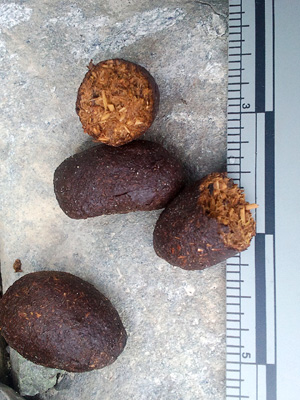 Scat: After being pelted by moose scat all day Vita says, “This is addicting! I can’t believe I didn’t figure this out sooner!” Moose scat has the perfect size, shape and content to be the perfect throwing object.

Patties are often a result of feeding on wetland vegetation.

Wallows: Cleared depressions in the ground 4’ wide, 4’ long, 3-4” deep: dug during the fall, in which the bull moose urinates and rolls. Cows also roll in wallows. 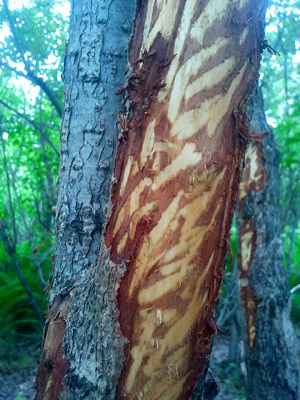 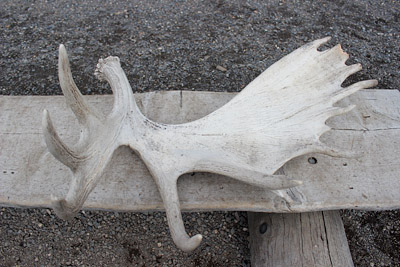 Antlers size indicates the health of a bull moose. They begin to grow in early summer and become full size by the rut in autumn. Sign associated with antlers is tree rubbings and thrashing of shrubs. Recent studies indicate that tree rubbing is more for scent marking than for dislodging velvet. It is a way for the moose to advertise his size and let his location be known. 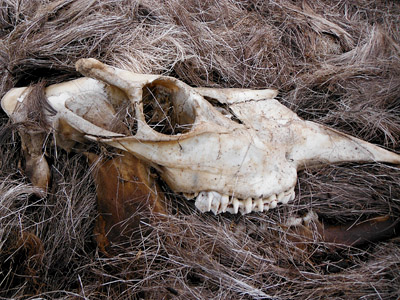 The following books and website are good resources for more information on recognizing moose habitat via their tracks and sign.

About the Author: Michelle Peziol is a Wildlife Track & Sign Evaluator with CyberTracker Conservation. She wrote articles while teaching at Alderleaf. Learn more about Michelle Peziol.

Return from Moose Habitat back to Wildlife Tracking Articles