Black-tailed deer are classified as a subspecies of mule (Odocoileus hemionus), which ranges throughout the western United States. These deer are found in forested regions from extreme southern Alaska, along the coast, West of the Cascade crest all the way down to San Francisco Bay area of California. This subspecies does not inhabit the drier, more open habitat of its large relative the mule deer. This species can be recognized by their tails which are oblong in shape and usually totally black or very dark brown on top and white underneath, have reddish-brown coats in the summer and grayish coats in the winter. Also, the males or bucks, have antlers that fork each time they branch, so that each branch divides into two points. Unlike white-tailed deer, which have antlers with points coming off of one main beam. Black-tailed deer feed on a wide variety of plant matter including berries, flowers, herbaceous plants, acorns and fruit as well as twigs and buds in winter time. 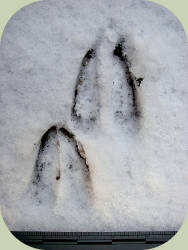 Tracks: The tracks of deer are familiar to many people. Black tailed deer and mule deer leave practically identical tracks, only they are found in different habitat types.

Like all deer, they have 4 toes which end in hooves. Though with mule deer and black-tailed deer, the tracks usually only show the first 2 toes which are much larger. Occasionally in deep substrate or when moving very fast, the smaller rear toes (called dew claws) will register in the track. The tracks are heart shaped overall, with front feet being slightly larger than rear.


Similar Tracks: Black-tailed deer tracks can be confused with other members of the deer family. Please see this article for a comparison of deer tracks versus other similar tracks: https://www.wildernesscollege.com/identify-deer-tracks.html

Black-tailed Deer: Ghost of the Pacific 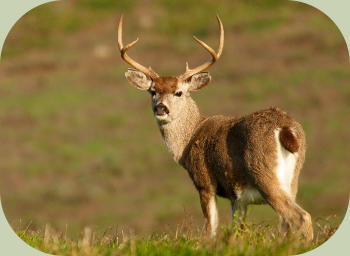 Return from Black-Tailed Deer Tracks back to Wildlife Tracking Articles