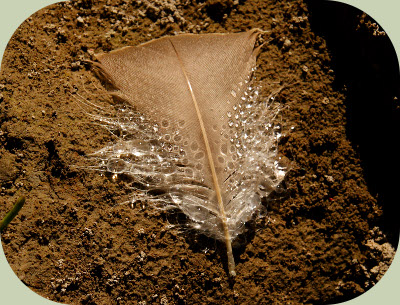 Imagine walking in a wild or not-so-wild place and finding a feather lying on the ground. After admiring its delicate beauty, you might ask yourself: what kind of bird did this come from?

To make this challenge easier, it can help to look at some feather basics.

Bird Feather Identification:
What are Feathers For?

This might seem an obvious question, but feathers perform a variety of functions and knowing this can help you learn bird feather identification more quickly.

Flight feathers are long, stiffer feathers with thicker shafts. These provide lift and control in the air. Contour feathers include all visible body feathers and provide the bird with several functions including: waterproofing, some insulation and a streamlined shape. These feathers are layered like shingles, underneath which can be found another layer of fluffier feathers such as semi-plume and down feathers.

Many birds also possess bristle or whisker-like feathers that tend to be very small, thin and usually located around the face. These little feathers - including both filo-plume and bristle feathers – act like sensory organs not unlike the whiskers of a mouse or cat.

When trying to learn bird feather identification, often the most useful feathers to have are those from the wings, body and tail. Flight feathers and tail feathers tend to be the largest, and can give you a sense of the relative size of the bird. While body feathers are the best ones to look at for colors and patterns.

Contour or body feathers are generally easy to identify by their shape, which is usually symmetrical on both sides of the shaft and broad at the outer tips.

Flight feathers are elongated and asymmetrical to a varying degree. The leading or anterior edge of a flight feather is the narrow side which allows the bird to cut through air. The trailing edge or posterior edge is wider side.

Tail feathers have at times a similar appearance to flight feathers, but there is a characteristic unique to tail feathers: the quill, when observed closely from the side has a step down where the bottom of the feather vane meets the quill.

Parts of a Feather

Since we are focusing on bird feather identification, we will observe here features of mainly contour, wing and tail feathers. The quill or calamus is the hard lower end of the feather from which it grew and by which it is attached to the skin, not unlike the root of a human hair. The shaft is the continuation of hard structure which continues entirely up the length of the feather.

The wispy, soft parts that come off the shaft are known vane, and are made up of smaller parts called as barbs and barbules. Barbs are main branches from which the barbules divide. Tiny hooks called barbicels come off of the barbules and create a dense net-like structure that is visible under a microscope. 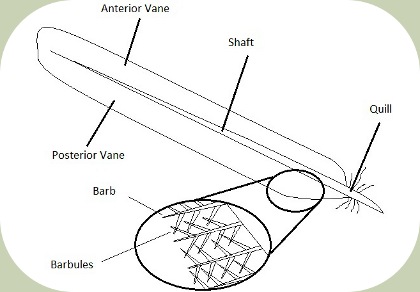 Types of Feathers on the Wing

Bird wings are divided into several major sections, each with feathers that perform specific functions.

Primaries are the longest, largest flight feathers and are located on the outer end of the wing. Primaries are often tapered on one or both vanes, creating space between the feathers called slotting that acts to significantly increase lift. Although, the tapering effect on birds with high speed and high-aspect ratio wings is due instead to the overall pointed shape of the wing and primaries may not show much slotting.

Along the mid-section of the wing are the secondaries, which are broad feathers often with equal vanes on both sides and a blunt, well-rounded or squared-off end.

The area of the wing nearest the body contains a shorter section of flight feathers called tertials, which are basically the last 3 or 4 secondaries. In the area where the first primary feather meets the top of the wing is a small cluster of feathers called the alula. The alula extends from the portion of the wing equivalent to our thumbs, can be manipulated independently of the wing and can be used to increase wing slotting or aid in flight control. The rest of the area across the wing is covered in several areas of smaller covert feathers that give the wing its streamlined shape.

Which Part of the Bird is This From?

The first step in the identification process might be to try to determine the part of the bird from which the feather came from. Take a close look at the overall shape and size of the feather when considering bird feather identification and ask yourself some of these questions:

Some birds have feathers that are so distinct that you can identify them down to the group or species using only one or a few feathers. Here are some very distinctive feathers to keep an eye out for when learning bird feather identification:

For further information, check out the excellent book, Bird Feathers: A Guide to North American Species written by former Alderleaf instructor, Dave Scott. It is the first and only field guide dedicated solely to the identification of feathers. The guide is richly illustrated with nearly 500 color photographs and explains how to use feather type, shape, and color to identify the species a particular feather came from. This is a valuable, information-packed resource for birders, biologists, and nature lovers. 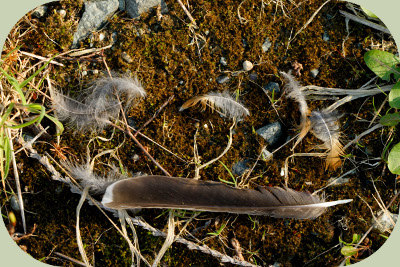 Return from Bird Feather Identification back to Birding Articles