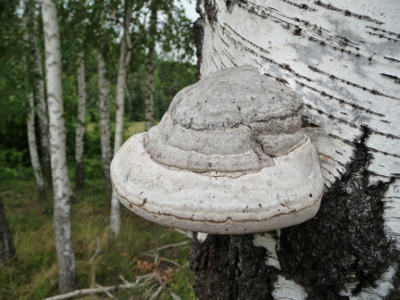 The birch polypore fungus is an incredibly useful and interesting woodland resource, the usage of which has great historical precedence, but tends to be underutilized in today’s outdoors community. The birch polypore is most well known by its moniker ‘tinder fungus’ in reference to its great utility in traditional fire making. Having been utilized for many thousands of years up until the modern day, it was famously discovered in the pack of Otzi the Iceman.

Although the epithet birch polypore has been applied to several species of birch loving shelf fungus, here we will be discussing Fomes fomentarius, also commonly referred to as horse hoof fungus, in reference to its physical appearance.

As indicated by the birch polypore name, this species grows on several species of birch across its range, specifically paper birch in our region and across most of North America. It will also grow on some other species, including beech. Found across the northern hemisphere wherever its host species are found, birch polypore is locally abundant, and depending may be one of the more common shelf funguses.

The primary use of birch polypore is in creating a substance called amadou, or mushroom felt. This is a suede-like material made from the processed fungus. Amadou can be used for a variety of applications from dressing wounds to making hats, but its most practical use is as a tinder for fire-making. Properly prepared, this amadou can catch a spark in a way similar to char cloth, but is also much more amenable to holding that spark and nurturing an ember.

Creating amadou for use as tinder from birch polypore, or potentially other shelf funguses, is a relatively straight-forward process. To begin with, we want live funguses. Old rotten ones won’t work. These can be broken off of trees as they are found. Try to select the largest specimens and leave the smaller ones behind to mature. 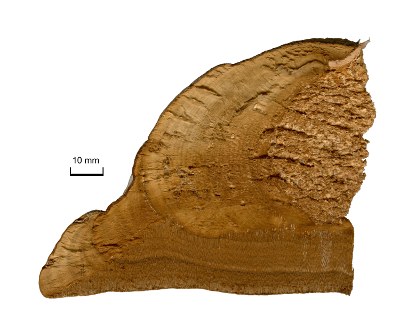 the middle section is the trama layer

Birch polypore has three layers: a tough, woody outer layer, a layer of tube-like pores, and, in between those two layers, a soft, suede-like layer called the trama layer. To make amadou, we want the trama layer. The cuticle (outer layer) and hymenium (tube layer) can be separated from the trama layer with a thin, sharp knife. This can be a bit of a hassle, as the mushroom really doesn’t want to come apart.

The process is easiest with fresh funguses. Dried funguses become pretty unworkably hard, but they can be soaked to soften them up. I will put them in warm water and leave them overnight. After cutting off the cuticle and hymenium you will be left with various sized pieces of trama. Try to clean these up as well as possible.

Once the trama layer has been isolated it needs to be boiled. I like to take all my pieces of trama and boil them in a weak wood ash solution for about 20 minutes. Plain water will also work, but the wood ash will make the amadou better for use as tinder.

After roughly 20 minutes of boiling, rinse the amadou off. Now it just needs to be pounded out. I’ll usually use a small wooden mallet or just a nice round stick and gently pound it to the desired thickness. As you work it, it will spread and thin. Be careful not to treat it too roughly and break it apart. Once it has been worked in such a manner, let it dry, and it will be ready for use. 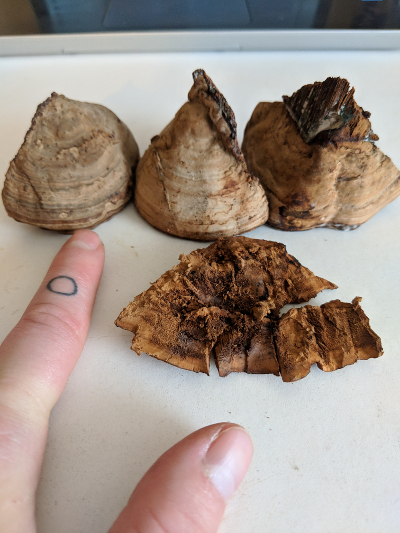 To use amadou as tinder simply take a small piece, rough it up a bit, and apply sparks. Done skillfully, it will catch and hold the sparks and begin to glow. At this point it can be added to some kind of fibrous material and blown in to flame.

Alternatively it can be used as a coal extender to assist in the making of friction fire or transporting fire from one place to the next. Once it has begun to smolder, amadou is relatively difficult to extinguish and will burn for a long time if kept from getting wet.

Although birch polypore takes a bit of work to find and process, amadou is a functional and entertaining way to create fire, and a springboard into interesting conversation. Amadou has become one of my go-to fire starters, and birch polypore is one of my favorite woodland finds!

Learn more about the birch polypore on Wikipedia.

About the Author: Jedidiah Forsyth is an experienced outdoor educator and wildlife tracker. He is a guest instructor at Alderleaf Wilderness College. Learn more about Jedidiah Forsyth.

Return from Birch Polypore back to Wilderness Survival Articles