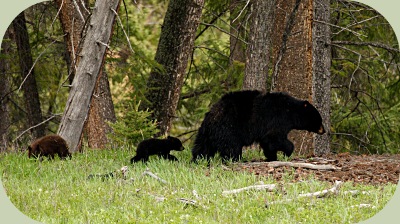 The American black bear is the most common and most adaptable bear species in North America. It is found in a variety of habitats including arctic tundra, hardwood forests, riparian areas, swamps, coniferous forests and forested mountain regions. They are absent in the central plains and open desert regions of the continent. Black bears share some of their range with grizzly bears, and can be distinguished from them by their shorter claws, lack of muscular hump between the shoulders and straight face profile (versus the grizzlies more dish-shaped face profile). Though called "black" bears, they come in a variety of colors and shades including black, brown, cinnamon, grayish, blonde and white. As you can see in the photo above, cubs born of the same litter can be two or more different colors. Black bears average between 90 and 400 pounds in weight, with males generally being the larger and heavier sex. The diet of the American black bear is varied and includes: fruit, berries, shoots, bulbs, tubers, buds, catkins, insects, young ungulates, and fish. 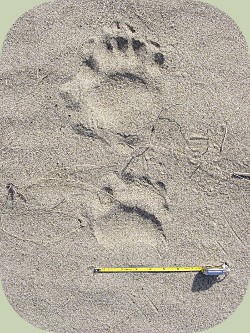 Tracks: The tracks of the American black bear are flat-footed, large and rather human like in appearance. Unlike human feet, however, bears have their largest toe to the outside of their feet, their feet are more robust and rounder, and they have sharp claws. Bears show 5 toes on both front and hind tracks. The claws on both front and hind often show up in the tracks. The negative space between the toes is filled with fur.

The rear tracks are also blocky, with the metacarpal having a fused heel and palm portion of the foot. When the whole foot is visible in the track, the rear foot will appear longer and the heel portion tapers to a blunted point. Sometimes the back of the rear foot does not register in the track. The claws on the rear feet tend to be shorter. A "v" of fur cuts into the rear metacarpal pad and may show up in the track.

Gaits: The American black bear travels over the landscape mainly by walking, but it can also trot, lope and gallop. These bears often travel in an overstep walk, in which the rear track lands ahead of the front track. The overstep walk is generally between 19” to 28” stride length and 8” to 14” trail width. While in a lope, the stride length is generally 25” to 30” and group length (length of the entire set of 4 tracks together) is 38” to up to 50” long.

Similar Tracks: Grizzly bear tracks are similar, but tend to be larger measuring 7 – 13” long by 5-8.75” wide for fronts, and 8.25-14” long by 4.75 – 8.5” wide for rears. The claws on the front feet of grizzly bears are generally longer than those of black bears. Polar bears are limited to the region around the far Arctic coastal areas that are not inhabited by black bears. On a much smaller scale skunk tracks can appear similar and you can see in more detail here: Skunk Tracks Article.


By the way, when you're out tracking or looking for wild animals, it's important to know how to stay safe in the outdoors, especially if you were to get lost. Right now you can get a free copy of our mini survival guide here, where you'll discover six key strategies for outdoor emergencies, plus often-overlooked survival tips. 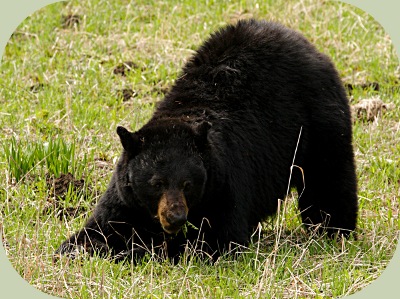